This fall, The Democracy Commitment has started a student internship program to regionally engage campuses & students with the national office, and to further TDC’s mission and goals.  The new Civic Intern Team (CIT) welcomes six new interns into the fold as a group of motivated and engaged students studying at or affiliated with our member institutions to help promote regional civic engagement efforts and activities providing the national platform that they deserve. Through their efforts both behind the scenes and at the forefront of TDC, the CIT will help to publicize the civic power of democracy’s colleges more than ever before.  So, without further adieu, let’s meet the inaugural TDC Civic Intern Team.

Grant Fishman serves as TDC’s intern for Fall 2017 assisting at the National Office in Washington, D.C., through The Washington Center internship program.  Along with his Internship, Grant pursues a BS in Politics, Philosophy, and Economics (PPE)  with a minor in Sociology at Suffolk University in downtown Boston. After growing up in Weston, Massachusetts, Grant attended a boarding school in Wilton, New Hampshire, before attending Suffolk and now lives in Concord, Massachusetts. At Suffolk, Grant represents the PPE Student Advisory Board as a Chair and assists in promoting the major within the University as well as contributing to projects and initiatives designed to further it. But while the Advisory Board plays a role in the success of the major, its primary focus is to ensure the success of PPE students and provide opportunities for young professionals. Civic engagement is essential in its mission and is a large part of what Grant has been working on at Suffolk these past few years. After graduating, Grant intends on pursuing a law degree in constitutional policy and continue on to pursue a career in public service.

Aaron Pallares, a native Houstonian and first generation American, made his way to Michigan for his love of snow. This scene of tranquility scene helped to provide an atmosphere of serenity and focus for his talents in graphic design, web design, and brand identity. Currently, as a student at Delta College, he aspires to one day become a digital marketer and brand ambassador.  Aaron Pallares has been married to his lovely wife, Jessica, for a decade. They create a wonderful team alongside their half-pint daughter, Zoe.

After being raised in Saint Paul, Minnesota, Nathan Bowman graduated high school and moved to California, where he received his Associate’s degree in liberal studies with an emphasis in behavioral sciences from College of Marin. Nathan is currently an undergraduate student at San Francisco State University pursuing a Ph.D. in Sociology. While studying at College of Marin, Nathan was the President of the Student’s for Social Justice club where he developed an interest in ensuring that students become civically engaged in their community. Student’s for Social Justice allowed Nathan to attend the CLDE meeting in Baltimore, Maryland, where he was featured as a speaker for multiple panels. At San Francisco State University, Nathan is representing a national-nonprofit called Net Impact which is a nonpartisan initiative to raise awareness about the national debt. Nathan has been inspired to help students develop an understanding of non-partisan issues within the United States. Civic engagement has become an essential role in Nathan’s academic career and he wishes to pursue a career in educating students about the importance of political issues. Further, it is his belief that the promotion of education is necessary for the developmental growth of young people, and it is his goal to assure that academia works towards enforcing diversity among students, faculty, administration, and staff.

Eden Shaveet serves as a Massachusetts-based regional intern for The Democracy Commitment. Her responsibilities include managing the organization’s social media accounts and initiatives, as well as assisting in the coordination of the Student Voice Project. Along with her service to TDC, Eden serves as a Commonwealth Corps member with United Way Youth Venture as the Venture Retention and Engagement Innovator at Mount Wachusett Community College.  As a recent graduate of Mount Wachusett Community College and the Gateway to College program, Eden received her high school diploma and her Associate’s Degree in Liberal Arts and Sciences in May of 2017. She is currently pursuing her Bachelor’s Degree in Psychology at Elms College and plans to continue her graduate studies upon her graduation in the Spring of 2019. As Valedictorian of her graduating class, Eden gave a speech advocating on behalf of alternative educational programming that was shared across the country by local news and the Gateway to College National Network.  She has since become a blogger and spokesperson for the Gateway to College program. In addition, Eden currently serves as the Vice President and Curriculum Designer of the Her Strength Foundation, whose mission is to promote reproductive health education for women and girls in developing countries. Eden’s curriculum was recently utilized in the Foundation’s first trip to Tanzania during August of 2017.Eden’s passions lie within the realm of educational advocacy and public policy, and is very excited to channel her abilities into furthering the mission of The Democracy Commitment.

Angelo Kapp is a student at Delta College in Michigan and also attends Northwood University. Angelo served as a student intern at the CLDE16 in Indianapolis, IN. He is the former Vice President of Citizens In Action, a student-led club that promotes student civic engagement around campus and local communities. Angelo is a member on the advisory committee for Somos Hispanos, a PBS show about Hispanic people: how they live, the issues they face day to day, and the positive work they do to make a difference in the community. The show highlights people, culture, and events that help promote positive images of the Hispanic community.  He is pursuing a degree in Advertising and Marketing and is a member of DECA, Society of Hispanic Leaders, and the American Advertising Federation.

Cindy Nicole Aldana is currently a second year student at Raritan Valley Community College located in Central New Jersey. Cindy is currently working to receive an Associate’s degree in Communications and Political Science. At RVCC, she also serves as a Senator for the Student Government Association, President of Debate Club and also a member of the Feminist Coalition. After finishing her last year at RV, she plans to transfer and has a grocery of list of schools that she desires to. One of them being Georgetown due to their great academics and integrity, as well as their beautiful location. After finishing her Bachelor’s degree, she aspires to attend Law School in the hopes and aspiration to practice Constitutional Law. To which, practicing law will give her great experience for her ultimate career goal; to become an Elected Official. All these goals and aspirations developed due to her interactions and experiences a RVCC. Communicating with students on their concerns and needs sparked her interest in desiring to serve with a purpose bigger than herself.

We look forward to working with these engaged student citizens and stay tuned as they help The Democracy Commitment advance democracy and citizenship in our community colleges.

Civics Unbound: Knowledge, Skills and Dispositions for a Thriving Democracy 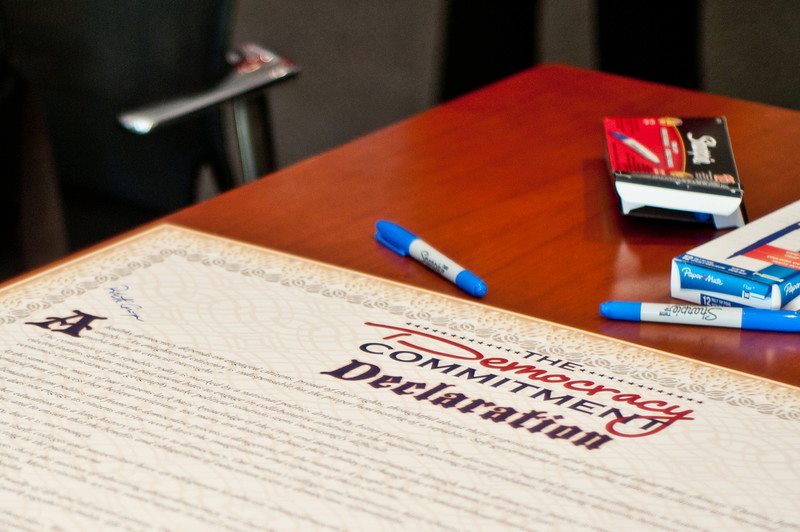