The Reflections of Our Amazing Time in Denver: Yup, it really was that good.

Our 2013 ADP/TDC national meeting in Denver has come and gone. We’re just now getting back into the swing of things, because that week was a wonderful, wonderful whirlwind.

Right before we left we had the final numbers: nearly 600 people – students, faculty, staff, administrators, and national organizations – came together from around the country to improve civic engagement on their home campus. 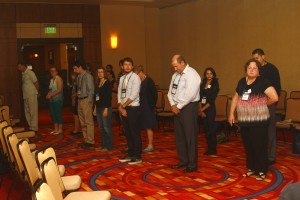 SWER, of Miami Dade College, using a “privilege line” in their presentation. In this process one steps forward/backward depending on how one answers certain questions.

Beginning Thursday morning, and continuing into the early afternoon, participants worked together to gain skills for program implementation and collaborate around specific projects during our pre-conference workshops, including our TDC partners Street Law, Inc., and Community Learning Partnership. By 3pm the energy was so high it seemed almost impossible that the official start of our conference could sustain the already uplifted spirits. Boy, were we wrong.

Steven Jordan, president of Metropolitan State University of Denver, welcomed the large group to his city, followed by a recent Metro State graduate who sang a beautiful and stirring rendition of the Star Spangled Banner.

Once formal introductions to the conference were made from ADP leader, George Mehaffy, and TDC co-founder, Bernie Ronan, Denise Fairchild, President and CEO of Emerald Cities Collaborative spoke. (Listen to her plenary talk.) She discussed the importance of civic engagement in the sustainability movement, and how informed and engaged Millennials will be the movers of shakers we need to create lasting change; all we have to do is give them the tools, skills, and the information. It was an out-of-the-box talk that moved one particular participant to refer to Fairchild as passionate and inspiring.

After that, we had wine, cheese and other delicious bits while getting to know one another. An excellent first day.

Friday morning started off early, but energized. The excellent breakfast buffet didn’t hurt either. With concurrent breakfast breakout sessions held by many national partners of ADP and TDC, our member institution participants received valuable information on resources they had not previously known were at their fingertips.

Peter Levine, of CIRCLE at Tufts University, spoke as the day’s opening plenary. There’s no need for me to tell you what he said because so many tweeted incredible bites of wisdom throughout his talk. (You can also listen to it here.)

The question and answer portion of the opening plenary engaged the audience to discuss issues of assessment, building partnerships across sectors and institutions, and engaging youth. The room was silent as Peter answered the audience’s queries – you could hear a pin drop; but the room was carpeted, so we didn’t test that theory.

Brian Murphy, president of De Anza College, and co-founder of The Democracy Commitment.

As the conference progressed from featured sessions, to concurrents, to lightning rounds, we learned about the importance of 21st century skills in the workforce from national partners (American Commonwealth Partnership, Work on Purpose, Young Invincibles, Community Learning Partnership), an amazing community partnership project called the “Human Library”, and myriad of other incredible programs, projects and ideas surrounding implementation, activism, social justice, active citizenship, and democratic learning. I watched as people walked from one session to the next and heard the excitement in their voices as they recounted the information they’d just absorbed. It was invigorating to be around such dialogue, companionship, and innovation.

That night the students gathered for their exclusive mixer. While there they played Wii bowling and learned about a civic engagement co-curricular program, “Wii the People Bowling”

happening at Western Kentucky University. Apparently there is a rather silly picture of someone showing some enthusiasm after getting a spare here. Aside from the delicious fare, mocktails, and raffle, the students even danced a bit. Good times were had all around.

By Saturday, the energy had yet to subside. Believe me, I was waiting for it, it just never happened! It’s a good thing too, as one of the most influential plenaries we’ve ever had (our post-conference evaluations give us cause to make such a claim,) opened up the day. Two students representing community colleges from The Democracy Commitment and two students representing four-year colleges and universities from the American Democracy Project sat on a panel to discuss the perception of civic engagement in colleges right now.

The town hall style panel opened up discussion about how to better serve students and meet their needs both in the classroom and on the campus. After faculty, staff and fellow students asked these star panelists for their advice on how to engage students in course content and in the community, the audience rightfully gave them a standing ovation. They were incredibly motivating.

Keeping the energy going for three days straight can be a daunting task, that’s why this year we added a dialogue dimension of the conference to tackle the often deemed “hard issues” or “uncomfortable topics” that go along with having a diverse society. Plus, by putting a lot of passionate, educated people around the table, you’re bound to get an adrenaline-induced high. I was awe-struck when walking into the large ballroom and see hundreds of people sitting around tables discussing issues of difference, hard topics of engagement, and collaborating to come up with viable solutions to difficult problems. One participant stated, “I really enjoyed the round table sessions, that way we were all able to share our opinions without feeling overwhelmed.” Democracy in action, my friends.

By the end of the conference, everyone was ready to let loose and party, (I’ll get to that in a second,) but not before we had our closing plenary where we stated our call to action for the next year, “Civic Pathways.”

Over the next 350 days we want our staff, faculty, and administrators to team up with their two-year or four-year counterparts to create pathways for students who transition from one institution to the next, whether by articulation or transfer agreements, or simply creating bilateral experiences among the two populations, to have an opportunity to keep in the community in which they began their civic journey. There are many TDC and ADP colleges already doing this: Illinois State University and Heartland Community College; SUNY Brockport and Monroe Community College; San Francisco State University and City College of San Francisco; these are just a few of our member institutions working to create richer, more dynamic, and more multidisciplinary opportunities for citizen students. ADP and TDC students come from the communities in which they live. They know the problems and they know the issues; why not work together to keep the collaboration going even after one student has transitioned onto a neighboring institution? Sounds like a great idea to us!

This was my second ADP/TDC conference, but over the last two years I’ve become quite a conference-goer for all things higher ed. Without bias (ok, a little bias), this was absolutely the best conference I’ve ever attended. It was engaging, full of energy and variety, and when I wasn’t having fun, I was often moved to tears. That could have also been the altitude. Denver is the “Mile High City.” I try not to cry too regularly. You know what made the conference that little bit better? The after party.

Yup, we rented out an entire bar/dance floor/game room/restaurant; almost 11,000 square feet all to ourselves. There was scrumptious food, unlimited drinks, a photo booth, a DJ, delightful dancing – with just the right touch of embarrassment dashed in, and excellent conversation. The party solidified what had been growing over the previous three days: friendship. And what’s a good citizen without some good friends?

By Amee
Posted in TDC Events on Jun 19, 2013
Tweets by @TDCNational